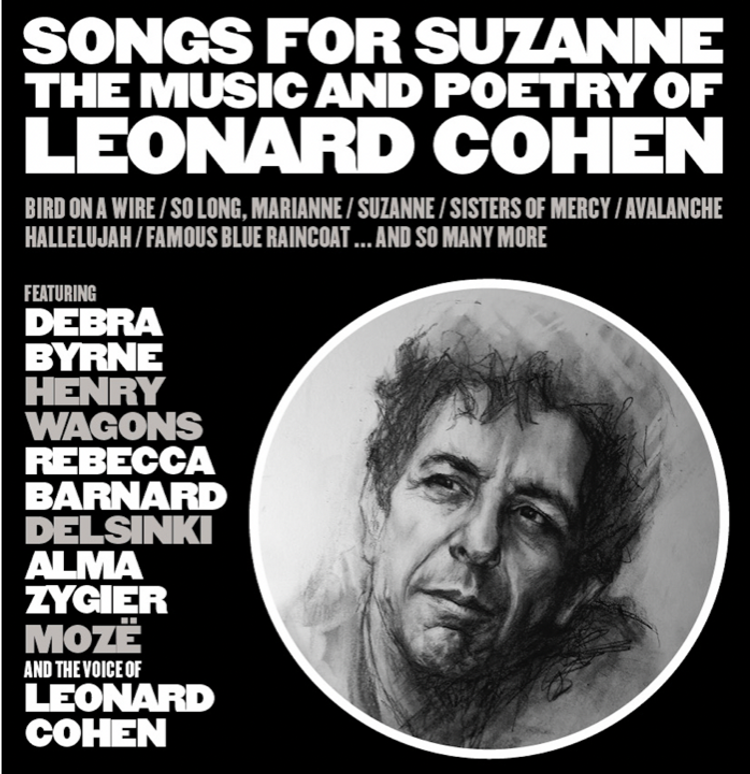 The fascinatingly enigmatic Leonard Cohen’s first clutch of classic albums saw him become one of the leading proponents of folk. Signed following a Newport Folk festival appearance, Cohen’s early albums were acclaimed by critics and ecstatically received by a community who within two years witnessed him provide a highlight performance at 1970’s Isle Of Wight festival, and receive outstanding covers of his songs by folk giants such as Judy Collins and Joan Baez.

Songs for Suzanne will be a celebration of the beginnings of a distinguished career of a brilliant singer-songwriter. Alongside standards including “Bird On A Wire”, “So Long, Marianne”, “Avalanche”, “Hallelujah”, and “Famous Blue Raincoat”, will feature many songs never performed by the man himself on his Australian tours. Leonard Cohen’s initial success came as an author, with two novels and four collections of poetry preceding his debut album. Cohen’s own readings of some of these works, which saw him compared to James Joyce, will be incorporated into the show.

Cohen’s songs will be presented faithfully in the way they were originally recorded. Musical accompaniment for the singers will consist of mesmerising finger-plucked guitar strings provided by Ben Dix and Dan McKay, the haunting violin of Xani Kolac, and Bass guitar and keyboards from illustrious musicologist Stu Thomas.

Audiences will be spellbound by classic Cohen favourites from his most notable albums such as Songs of Leonard Cohen, Songs from a Room, Songs of Love and Hate, and New Skin for the Old Ceremony. Known for his haunting acoustic melodies and deep, raw vocals, Cohen was a true folk singer and poet who adapted his songs and style as time went on, never losing sight of the current music trends and modifying his sound through the decades.

There will be one show only, so please do join us for this amazing journey through the music and poetry of Leonard Cohen.